There’s been lots of discussion and debate over the proposed rezone surrounding the Mt. Baker light rail station. I’ve posted about the proposal a few times before (here and more recently, here), but wanted to let readers know that the South Seattle Emerald (another, new South-end news source worth checking out) has some new commentary to add to the dialogue. Be sure to click here to read the whole thing.

The rezone would change the existing zoning to a designation called Seattle Mixed-use and raise height limits to 65, 85, and 125 feet, depending on the parcel of land in question.  I attended to testify strongly in favor of this 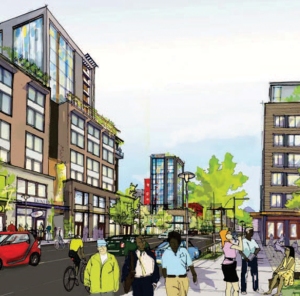 proposal, as it represents the best way to develop Rainier Valley in a way that is inclusive, attractive, and future-focused.

The reason for the proposed rezone has its roots back almost 15 years.  Back in the late 1990s, the Seattle Department of Neighborhoods, in tandem with neighborhood residents and other stakeholders, developed a vision for the northern corridor surrounding Rainier Avenue South.  Through this plan, they envisioned development that was transit-oriented, mixed-income, and walkable.  While the rest of Seattle has continued to change at a rapid pace and Link Light Rail brought much needed connectivity to the neighborhood, the status quo, with respect to zoning, has not led to the kind of development desired there.  Much of the area remains low-density strip malls or underutilized buildings that fail to engage pedestrians or integrate well into their surroundings.  The rezone would create additional incentives and a framework to make this happen, in a way that is consistent with the original vision.

One thought on “More Thoughts on the Mt. Baker Rezone”