The Seattle Transit Blog has a report on some new Link ridership data: 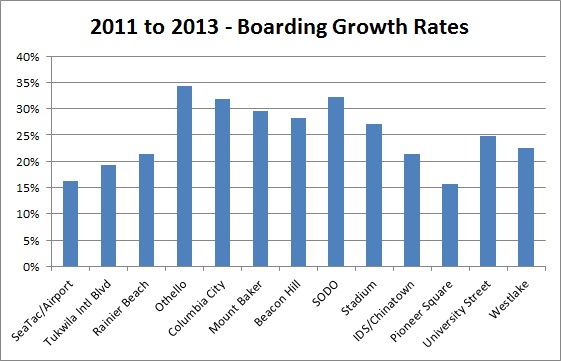 Sound Transit has released new station level boarding data that, unlike past releases, covers entire years instead of periods between service changes. Here is the raw data. In all cases the figures below refer to daily weekday boardings.

Total weekday boardings are still highest at the terminus stations, with the Rainier Valley and Beacon Hill making up 27%.

In absolute terms, daily boardings at SeaTac and Westlake also grew the most. Southeast Seattle stations were mostly in the middle…

However, the Rainier Valley and Beacon Hill had four of the five highest percentage growth rates.

…Overall, ridership is heading in the right direction. There is no need to listen to calls for a one-time bump in ridership that might come from subsidized parking. Instead we should keep to the path that’s generating all day, sustainable growth: increase the number of people allowed to live near the stations and improve the bike, pedestrian, and bus connections to them.

For the full report from the Seattle Transit Blog, complete with even more charts and graphs and data, click here.