Darryl Smith, former Deputy Mayor and longtime Columbia City community organizer, is featured on the latest Making Change podcast. In the interview, Smith goes into his long-history with Columbia City and his early efforts to help revitalize the neighborhood. It’s worth a listen (click for audio):

In this episode of Making Change, Darryl Smith, a former deputy 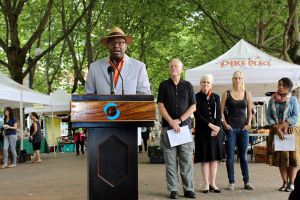 mayor of community in Seattle and a longtime community organizer, talks about how a group of trained community members can help bring more people into
important conversations about policy and change.

“The more organized a community is, the more actively engaged they are and the better we all are for it,” he says.

To boost participation and bring more voices to the table during his tenure, he recruited, trained, and paid a network of advocates to encourage greater civic activism among their neighbors. He invited those advocates and the public to more than 150 events in four years, including “open house” days at city hall.

Those efforts paid off.

Facing an increase in gun violence and other crime, his network turned to neighbors and asked, “What do you need to feel safe in your neighborhood?”

Their answers helped the city institute new training and procedures for the police, some as simple as making officers more available to talk to people in the neighborhoods they patrol.

In this episode, Mr. Smith also talks about his transition from an actor to a community organizer and his successful efforts to revitalize the Columbia City neighborhood in Seattle.