Opponents of a proposal to build a series of trails for mountain bikes in Beacon Hill and Columbia City’s Cheasty Greenspace lost the first round in their battle yesterday, when the city cou 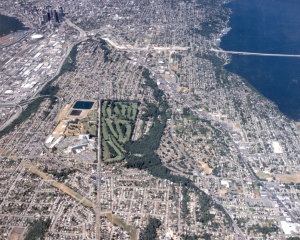 Some neighbors of the park, which spans 43 acres in Southeast Seattle, oppose the 10-acre trail project (of which about 2 acres would consist of actual trail space) because, they argue, it would result in loss of wildlife habitat and urban tree cover; it will compromise the safety of park users (including cyclists); it will increase parking pressure in the area; and because, in the words of the group Save Cheasty Greenspace, “Passive use park lands should not be converted to active use park lands.”

Additionally, opponents argue that the council is moving forward with funding for the plan (which has a total price tag of $750,000) before proponents have raised their own half-million-dollar contribution and presented a formal plan to the council. “And by that point it is unlikely that there is any turning back,” an email from the Seattle Neighborhood Coalition put it earlier this month.“I’ve seen some videos of these mountain bikes—these kids are doing these twists and all this stuff. I asked the question on this project … [what about] safety concerns and insurance concerns?”—Council Member Bruce Harrell

(Parks director Christopher Williams said today, “We recognize that some of the input and concerns that the community has need to be reflected in the design and the proposal going forward. It’s our hope that we can still get there.”)

Proponents, meanwhile, argue that a series of bike and pedestrian paths will provide “enjoyment, recreation, and education” to residents of the surrounding neighborhoods, and will create a new pedestrian connection between Beacon Hill and Columbia City.