Kiro’s Graham Johnson has a piece up on yesterday’s Cross “Walk-In” for Safe Streets: 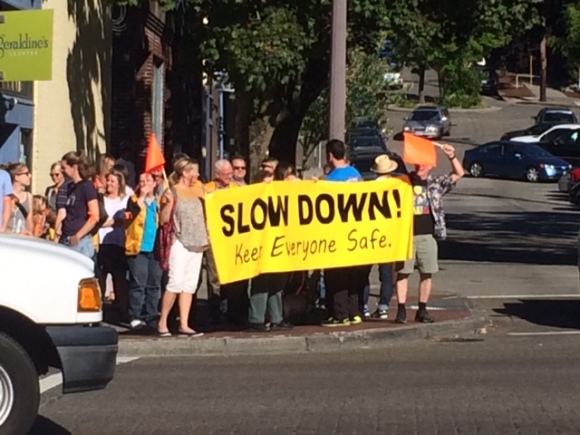 Residents and business owners in Columbia City rallied Friday to call attention to safety improvements they say are needed along Rainier Avenue.

They say cars too often go much faster than the 30 mph speed limit and that signals are timed poorly, allowing pedestrians too little time to cross the street safely.

She organized the rally at Rainier Avenue and South Ferdinand, the same intersection where a driver plowed into a hair salon and deli last week, injuring seven people.

“We were lucky that no one was killed,” said Jeffrey Taylor, who sells insurance across the street from the site of a less-serious car into building incident earlier this year. “We’ve had cars running into people, running into buildings.”

They plan to bring up their concerns again at a Sept. 17 community meeting with the Seattle Department of Transportation.

SDOT city traffic engineer Dongho Chang said the timing of traffic signals will be adjusted by the end of the year, and that two radar-warning signs will be installed to tell drivers how fast they’re going.

He pointed out the car into building crash last week was a matter of “driver responsibility.”

Seattle police said Friday the driver was unconscious, with her hands off the steering wheel, at the time of the crash.

She was initially cited for negligent driving but the case remains under review.

It is unclear if she fell asleep or had a medical problem.