As many are now aware due to news coverage by the city’s major news outlets, shots were fired on Monday night at 37th and Oregon, right by the Columbia Public Health building and the Shell Station on Genesee. 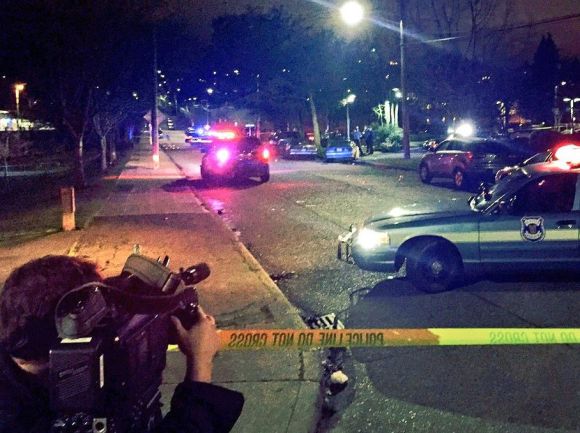 According to the SPD Blotter:

A shootout between several suspects damaged three cars and a home shortly after 7 PM Monday.

Witnesses described a rolling gunfight between the three cars near South Oregon Street and 37th Avenue South. There was a collision, and then more shooting as the suspects got out of their cars. No one was injured.

Officers found a nearby house damaged by gun-fire, as well as bullet holes in the vehicles involved. CSI detectives collected evidence and impounded the three cars involved in the shooting. Gang Unit detectives are investigating.

Komo was first to pick up the story. Their coverage can be viewed here.

The shooting happened near 37th and South Oregon at about 7:30 p.m., according to police.

Neighbors say they thought they heard fireworks, but when they looked outside they saw a man firing a pistol.

A number of cars, homes and windows were shot, but luckily nobody was hurt.

The shooting spooked residents in the normally quiet neighborhood.

Police found a wallet at the shooting scene and are now questioning the 26-year-old man. The man’s mother said he was not hurt and was the one who called police to the scene.

Police are still investigating and have not released information about any potential suspects.