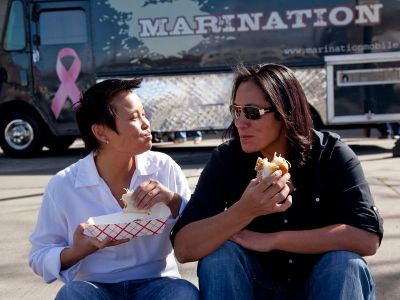 After a few years of sleuthing the scoop on the Esmay building, things seem to be pretty official with multiple media outlets now reporting the opening of a new restaurant from the owner’s of Marination at Rainier and Hudson.

Last week, Marination got in touch directly with a mini-press release explaining their proposed plans for their upcoming restaurant…and this week, there is already a crew of workers making changes to the building (most likely setting up the first phase–a full commissary kitchen for some of Marination’s other projects).

Both Eater Seattle and Seattle Met picked up the story and even included some of Columbia City Source’s ongoing coverage of the many potential plans that have fallen through.

For two women who built their business out of a food truck, Marination owners Kamala Saxton and Roz Edison have a knack for turning uncommon older spaces into congenial bars and restaurants. Now the pair are expanding the Marination empire to Columbia City, turning the former Esmay Auto Rebuild garage just off Rainier Ave into a restaurant.

It doesn’t yet have a name. And while it’s not technically a Marination, it will share a distinct aloha vibe with the company’s other spots on Capitol Hill and in West Seattle…and the big blue truck where it all began.

A few favorite Marination dishes will show up on the menu, but otherwise company chef Angie Roberts gets to create an entirely new lineup of sunny Asian-Hawaiian fare. The restaurant will serve breakfast, lunch, and dinner, plus weekend brunch. Saxton wants the place to function as a community center of sorts, a place for Little League banquets and casual meetups. Yes, it will be super family friendly, she says. “But expect booze-filled evenings.” There will be ample cocktails, plus the space has a massive attached parking lot that in Saxton’s mind “screams beer garden.” And these ladies would know—the patio at Ma Kai might be the most scenic beer garden in town.

Saxton and Edison were scouting for a commissary kitchen—a place to prep the food served on the truck and elsewhere—and decided to check out the 1947 garage, which had attracted initial interest from a few local chefs and a brewery in the past few years, but was still available. It had great bones and enough room for both a commissary and a full-on restaurant.

Since the space is bigger and more nocturnal than the Marination locations, and will serve a far broader menu than the truck, it felt right to give it a separate identity. Plus, she says she and Edison had a lot of fun opening Good Bar in a former bank building in Pioneer Square (see what I mean about cool spaces?).

The official word is the restaurant will open this fall, but Saxton dares to dream it could happen by late summer…all the more time to enjoy the beer garden. There’s also talk of a popup or two in the parking lot while construction is happening. Keep tabs on all this over at the Marination Facebook

The Seattle Times also picked up the new addition to the neighborhood:

MARINATION’S COMING TO COLUMBIA CITY, and it sounds like it’ll make the neighborhood very, very happy. The new restaurant from Roz Edison and Kamala Saxton doesn’t have a name yet, but it’ll be in the building formerly housing Esmay’s Auto Rebuild (3714 S. Hudson St.). They plan to be open for coffee and so forth in the morning, weekend brunch, and cocktails and dinner — the latter with an Asian-Hawaiian menu featuring local ingredients.

Edison and Saxton live in Columbia City and Seward Park, so it’ll be closer to home for them than their other spots (the various Marination incarnations and the swell-looking newish Good Bar in Pioneer Square). Edison says, “We’re excited about all the growth happening in this part of Seattle and we wanted to bring some aloha to it.” They anticipate opening next fall.