Daily Journal of Commerce on the Angeline/PCC

Clair Enlow has the a new piece entitled “Design Perspectives: Angeline Apartments will Feed Columbia City” in the Daily Journal of Commerce. Click here to read the whole piece. 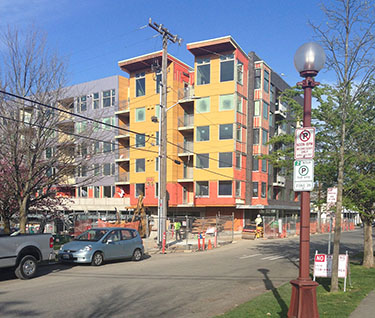 Columbia City has a long history, but it has waited a long time for Angeline. Now a big package of sorely needed urban goods is being delivered, on a very tough site.

Security Properties is developing the mixed-use building between South Angeline and Edmunds Streets, just off Rainier Avenue South. It’s anchored by a PCC Natural Markets grocery store with 193 apartments above.

Luckily, the project is not going to make this reviving neighborhood a different place. But it will be even more populated day and night — and more fun to walk around. When it opens in July, Angeline will give back to Columbia City with some new, semi-public streets…

…Security Properties purchased the site in 2011 from HAL Real Estate Investments, which had bought it in 2007. After lengthy reviews with community input, the landmarks board had rejected design proposals from HAL showing a 306-unit apartment complex wrapped around an interior court. The board was more receptive to Security Properties’ proposal, which made the building very approachable from three sides.

The Angeline project was designed by Bumgardner, which also designed PCC’s first supermarket-sized store in Fremont, part of a mixed-use project there called Epicenter.

At six stories, Epicenter and Angeline are each taller than their historic neighbors. But the five-floor residential part of Angeline is stepped back from the edge, and the tall walls are not parallel to the base. They shift direction, which makes for interesting views from all sides and from the many apartment balconies, and breaks up the bulk and scale.

Unfortunately, the character of the outer walls seems to shift abruptly with each corner, which makes the much-reviewed building look like it was designed by committee — which, in a way, it was.

Looking east along South Edmunds Street in Columbia City, this view shows that Angeline sits on a difficult site. Completion is scheduled for July.

Perhaps the biggest challenge to developing the site was an existing one-story corner bank with drive-through lanes and parking. The bank carves away about a third of the Angeline block, but it now faces 20-foot-high concrete party walls on two sides.

The good news is on top, where a long, broad deck above the 20-foot base of Angeline will support an urban farm similar to one that produces food for Bastille Cafe and Bar in Ballard, according to John Marasco of Security Properties, which owns the building in Ballard, too.

The piece goes on to discuss some of the specifics of the location, the planning, and the overall design of the building. Click here to read the whole thing.

One thought on “Daily Journal of Commerce on the Angeline/PCC”