Crosscut’s Eric Scigliano has an interesting article on jet noise in the Southend. The bulk of the article centers around Beacon Hill’s issues with air traffic and noise, but there is a section on Columbia City’s own Ray Akers’ ongoing battle with the FAA and his efforts to keep the Rainier Valley a bit quieter: 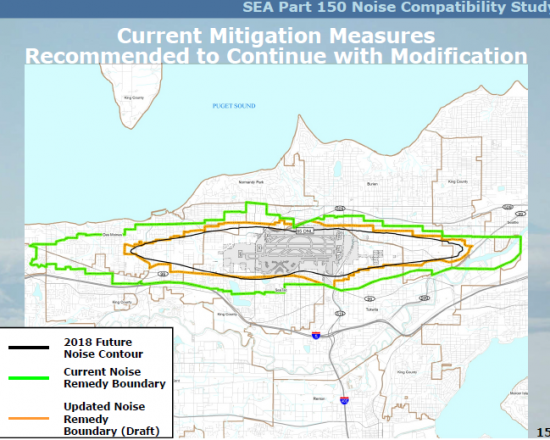 Twice, in the late ’90s and in 2010, Columbia City realtor Ray Akers caught the FAA extending its northbound departure corridor to the east, past Beacon Hill and MLK Way and over the Rainier Valley (and Akers’ house), with no announcement or review. The first time, he says, the agency relented and restored the original routing. The second time it stonewalled, not even acknowledging the change. Akers got Congressman Jim McDermott’s office to demand an explanation. The FAA’s acting regional director replied that this “Plan Charlie” routing was necessary whenever “localized weather or clouds” impeded the ability of Boeing Field controllers to track Sea-Tac jets visually. Akers replied that this hadn’t been necessary for years previous, and that jets were being rerouted even when no adverse weather interfered.

Eventually the jets stopped crossing into the valley. FAA spokesman Kenitzer says the agency “corrected” the routing after “discovering” it had somehow strayed off course.

“It takes a lot to get the FAA to respond,” says Magnolia’s Robert Bismuth, a longtime private pilot himself. “The FAA has two mandates, safety and commerce, and no mandate about anybody on the ground. It traditionally hasn’t responded to noise and pollution concerns. If you want it to, you have to involve the congressional delegation.”

That’s what worked for Magnolia. In 2009 the FAA proposed lowering the Class Bravo “floor,” the minimum altitude for incoming jets, from 3,000 to 2,000 feet. In familiar fashion, it convened public meetings in Tacoma, Burien and Everett, but none in Seattle where the effects would be most severe.

Bismuth got McDermott and Sen. Patty Murray, both on committees overseeing the agency, to write letters. And he played the safety card: This would drop the floor for the Lake Union seaplanes and other “uncontrolled” aircraft that fly below the jets to just 500 feet. Besides consigning Magnolia and Queen Anne to noise hell, this would come too close to hilltop water and communication towers. The FAA conceded the safety issue and dropped its plans.

Beacon Hill doesn’t hold that trump card, but it may be able to play another: the National Environmental Policy Act, which bars environmental discrimination against poor and minority communities — the sort of neighborhoods that wind up under flight paths all across the nation…