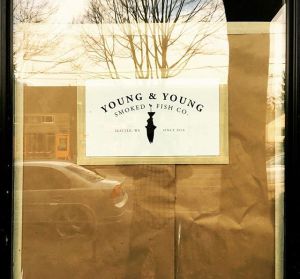 After months of really quiet rumors, a sign in the window next to Eyman’s Pizza confirms that Hillman City is about to get a new addition. While there’s not a ton known about Young & Young Smoked Fish Shoppe, here’s what I’ve been able to track down:

The business is run by Zac and Jesse Young. From this post on Cupcake Royale’s blog, it sounds like they’ve been in the smoked fish game for a few years.

Also (at least partially) confirmed, is that the business has some connection to Capitol Hill’s beloved Wandering Goose (update: one of the owners is married to Wandering Goose owner and chef, Heather Earnhardt)